The most famous example being the George Foreman grill.

Two electrically heated plates on a hinge fold over the food cooking it from both sides at once.

This is the appliance most people think of when looking to buy an electric grill.

A flat surface heated from underneath, this is a hotplate you fry things on and is set at a slight angle to allow excess fat to run off.

These are what you see eggs, bacon & burgers etc... being fried on in cafés & restaurants.

Some press grills can open out flat so the plates can be used as a griddle.

Some electric cookers come with a griddle in place of one or 2 hobs.

These are great for indoor BBQs and tabletop cooking.

Combination electric grills are a press grill with a hot plate attached, this allows you to griddle cook eggs, bacon, hash browns etc... at the same time as grilling your meat.

Most press grills cook chicken and fish OK, but have issues with red meat which is a problem as they are sold as a healthy way to cook red meat, especially steaks, chops and burgers. 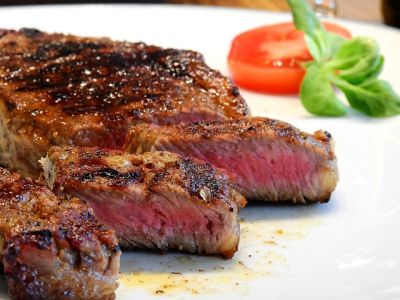 To cook a steak you need to sear it, giving it a  caramelized outer crust, while trapping the juices inside the meat leaving it soft & juicy.

Why Use a Press Type Electric Grill?

Frying red meat in oil and its own melted fat is not the healthiest option, you can drain off the fat as you go,  a ridged skillet helps with this.

Putting slabs of red meat under a traditional grill allows the fat to run off, but it as the fat gets hot it smokes, stinking out the kitchen.

A BBQ is the best option as the fat runs off into the grill, and as you're outside the smoke & smells don't matter but few people have the luxury of being able to fire up BBQ  whenever they fancy a steak, burger or chop.

The press type electric grill tries to give the best of everything. It lets you cook your meat indoors, safely with no mess, flame or smoke by trapping the meat between two electrically heated plates.

The Plates are supposed to sear the outside allowing the meat to cook down and the melted fat run off into a container before it gets hot enough to smoke.

Press grills which get hot enough to sear the steak can remove all the juices as well as the fat and leave your meat dry.

If they don't get hot enough to sear, the fat doesn't melt and run out.

Instead, you get both meat and fat boiling in the juices, which then run off taking the flavour with them leaving you with boiled fatty meat.

The press Grill is a compromise, not a replacement, it will do a good steak but not a perfect one.

What to look for

We recommend at least a minimum  4 portion grill for one to two people, for families or entertaining, there are 6, 8 & 10 portion sizes.

If the plates aren't removable any grooves between ridges must be wide enough to be able to clean easily.

This will let you know when it's ready to cook. The simplest grills only have a light that tells you when the grill has reached the set temperature.

You need different temperatures to cook a fillet of Salmon than to sear a steak, so an adjustable thermostat is a nice option.

Also handy if you're making paninis as you can tweak the temperature to match the size and types of your fillings.

The more wattage the better as every time you open a press grill some heat escapes, this is why some are timed to stop you opening them until your meat is ready.

The best grills have enough power to quickly build back up to the desired heat level.

Preferably above  232°C (450°F). This is the temperature you need for properly searing steaks, chops etc.. Although you can safely cook meat with lower temperatures. 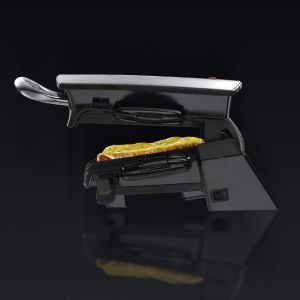 For Press grills, a floating hinge helps ensure even cooking on both sides.

A useful bonus feature - An upper plate you can lock above the food. You can use this for cheese on toast, melts & bruschettas.

The George Foreman Press Grills are still (after 10 years) our best selling electric grills. They are tried & tested and our users love them.

A few notes about  them :

They are small, 1 portion =  about 1 standard burger. The 2 Portion compact Grill takes 2 standard burgers or 2 small chicken breasts. We recommend getting the 4 portion grill instead, it costs a couple of pounds more and will easily handle two ¼ 1b burgers or two decent sized chicken portions

Most are basic with no on-off switch (you control it from the wall socket) and no temperature control so you cook by timing your food, (the manual has a guide).

All George Foreman grills with fixed plates are quite difficult to clean, but they are very reasonably priced and if you register online you'll get a free extended 3-year guarantee.

At around  £21 (March 2019) the 4 portion is a robust little press grill, ideal for the single person, student, compact living space etc... and is our Recommended Best Budget Buy.

We have 3 other Recommended Best Buy Press Grills from the George Foreman range:  The 360° Family Grill, the 6 portion family grill and the Four Portion Grill and Melt, with its Removable Plates and inbuilt timer.

The only combination grill we recommend is the George Foreman  10 portion grill/griddle with timer, which is exceptional value for money. 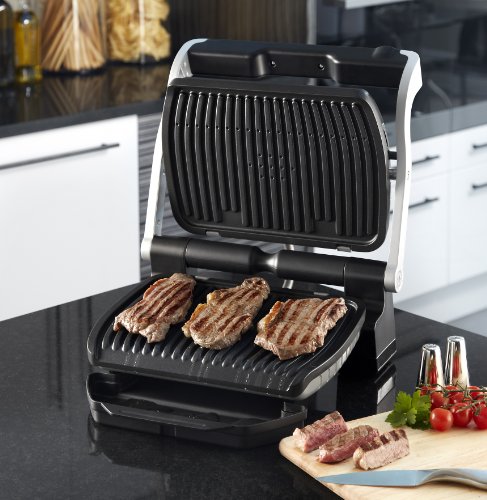 The rest of our best buys don't have the George Foreman pedigree but they do outperform them with easier cleaning and better functions.

Our recommended easy use grill  The Tefal Optigrill has a fully automated cooking system.

All our recommended best buys have a minimum 2-year guarantee and are pleased to say that after considerable lobbying our recommended easy use grill  The Tefal Optigrill UK guarantee has been extended to 2 years, in line with Tefal product guarantees in Russia, Norway, Switzerland, India, Thailand and a dozen other countries.

Our recommended Best buy press type electric grill is the Cuisinart Griddle & Grill which has a 5-year guarantee. It is a very well made press grill which can be opened out flat and used as a griddle

The letters rub off the dials, this small fault does not affect its exceptional performance. 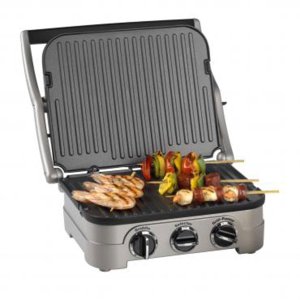 Take a look at our Recommended Best Buy Electric Grills, each has a short review on the product page